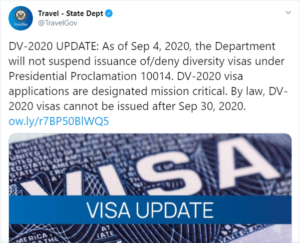 The United States State Department has referenced DV-2020 visa applications as “mission critical”. This information was made public by means of their official Twitter account on today, September 9, 2020.

This move follows a ruling by United States District Judge Amit P. Mehta concerning DV-2020 cases in which the judge ordered the State Department to “undertake good-faith efforts, directly and through their designees, to expeditiously process and adjudicate DV-2020 diversity visa and derivative beneficiary applications and issue or reissue diversity and derivative beneficiary visas to eligible applicants by September 30, 2020.”

For the past couple of months, Judge Mehta had been considering lawsuits filed on behalf of DV-2020 applicants whose application process was disrupted by the Ban on immigration to the United States issued by the U. S. President earlier this year.

Designating DV-2020 cases as “mission critical” implies that such cases are to be prioritized as far as visa issuance is concerned. But with only 15 business days to the legally-established deadline, it still remains unclear how the order by the judge will be implemented and how many DV-2020 applicants will actually benefit from this gesture?

Since the ruling on last Friday, September 4, 2020, applicants in various parts of the world have been receiving mixed responses from KCC and embassies. From KCC “still waiting for instructions” or embassies “haven’t received relevant cable”, to “embassy still closed!”, 3 business days after the order was issued – which reflects how challenging the application process remains for DV-2020 applicants at consular posts worldwide.

Although hopes have been raised to some extent, the ruling issued by Judge Mehta fell short of blocking the ban on immigration or extending the September 30th deadline, two key points which DV-2020 applicants had generally been hoping for.

The U. S. District Judge has set September 25th as the date for another review of the latter point, a decision which constitutes the final strand of hope for most DV-2020 applicants in their current struggle to emigrate to the United States.

All attention is therefore drawn to September 25th when Judge Mehta is expected to rule on a possible extension the established deadline of the program. His ruling will certainly be a test of what’s possible and what’s not in the DV Program, as the State Department reiterated in their tweet that “By law, DV-2020 visas cannot be issued after Sep 30, 2020.”