The Visa Bulletin for the month of January 2023 has been published! In it – as usual – are the regional cut-off numbers that will apply in the Diversity Visa program in February 2023.

In the January VB, most regions observed increase in their cut-off numbers. The increases have made new cases current for interview for February 2023. Such cases can expect to receive their interview notification as of now (December 2022), although one’s case number becoming current in the Visa Bulletin does not necessarily mean that their interview will be scheduled immediately.

Their interview will depend on whether they have submitted their DS-260(s), whether it has/they have been processed, as well as other factors relating especially to the embassy or consulate where their interview is to be held.

This concerns cases whose case numbers are lower than the cut-off number shown for their region in the just-released VB.

On the other hand, those cases whose case numbers are the same as or higher than their regional cut-off are still not current with the publication of the January Visa Bulletin. applicants concerned must continue to follow the VB as it is published in upcoming months – to ascertain the status of their case number.

With the exception of Europe, North America and Nepal whose cut-offs for January were maintained for February, most regions and exception countries experienced a high increase in their cut-off numbers in the just-released Visa Bulletin, something that will certainly reignite the discussion surrounding justification for such high increases.

Below are the regional cut-offs numbers that will apply in February 2023 as shown in the January 2023 Visa Bulletin: 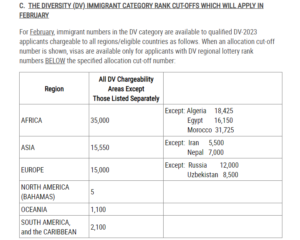 The Visa Bulletin is published every month, and it is by means of it that Diversiy Visa applicants get to know the month that their interview is supposed to be held. Publication of the next VB – the VB for the month of February 2023 will be done next month. The cut-offs shown in that Visa Bulletin will be for March 2023 interviews.

Suggested: This article – to know what the Visa Bulletin is all about.